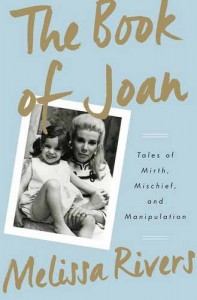 The comedy world lost a real treasure when Joan Rivers died last fall. One of the hardest working women in show business, Rivers was apologetically her own person, telling it like it is, but rarely with malicious intentions. She often said what everyone was thinking but would never say, and there were many instances where she was the only one who could get away with saying certain things about certain people.

Through all of her appearances and all of her insults, one thing about Rivers was ultimately clear: she loved her daughter Melissa more than anything, and their relationship was something she truly treasured. And the feeling was definitely mutual, as Melissa makes clear in her book, The Book of Joan: Tales of Mirth, Mischief, and Manipulation. This is a collection of essays that look at Joan's childhood, what motivated her to succeed, her habits, foibles, fears, and pet peeves, and especially her interactions with Melissa and her grandson, Cooper.

This is a sweet, funny book that provides some interesting insight into Rivers' persona outside the spotlight, and it chronicles a mother-daughter bond that was truly special. I laughed from time to time and unsurprisingly, I even got choked up a little bit. It's a tremendously engaging book, but I wish that Melissa didn't try to be as funny as her mother throughout the book, as sometimes her jokes undercut the stories she was trying to tell. (She even provided her own rim-shots occasionally). I recommend this to anyone who has a fond of Joan Rivers.